In the 2012 Taxonomy, the accumulated gains and losses on Available-for-Sale and Held-to-Maturity securities had the elements representing accumulated gains as a debit amount and accumulated losses as a credit amount.  In 2013, these balance attributes were changed to reflect the amounts of unrealized gain or loss for AOCI for Available-for-Sale securities. As a result of the balance attribute being different than some companies expected, the values were entered as negative amounts.

In the 2013 Taxonomy, the balance attributes were changed and the elements’ period type was also changed from an instant to a duration.  Because these elements represent the cumulative amount of gains and losses, the period type does not match the meaning of the element.  Filers should not create a point-in-time element by entering a start and end date with the same value to represent an instant.  In addition, they should not use the current context.

This recommendation applies specifically to the 2013 taxonomy.  This guidance will not apply to taxonomies subsequent to the 2013 release.

In the 2013 Taxonomy, the filer will need to create extension elements as the accumulated gains and losses on Available-for-Sale and Held-to-Maturity securities are modeled as durations.

Do not use these elements with the current context.  The diagram below shows an example of the attributes of the extension items that should be created. The following lists the duration elements in the 2013 US GAAP taxonomy that should be extended for.  For each duration element, two instant extensions are given. The first is for the pretax component within AOCI.  The second is for the difference between the fair value and carrying value of the investments.

In each of the pairs of Available-for-sale extensions above, the first extension has been modeled from the perspective of the impact on AOCI as this is the disclosure required under US GAAP for Available-for-sale securities.  The second extension is modeled from the impact on investments.  The values in the two should always be the same, although they will be of opposite balance types.

The following figure shows how the difference between Fair Value and Amortized Cost are typically shown with the impact on investments being disclosed. 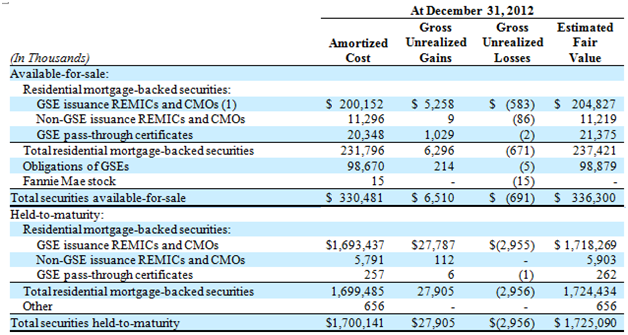 This is a known issue which was addressed by the FASB in the 2014 taxonomy, and in a FASB FAQ. The 2014 additions are instant period types under AvailableForSaleSecuritiesFairValueToAmortizedCostBasisAbstract. Company extension taxonomies using the 2014 or later versions of the UGT should use those elements and create calculation trees in which amortized cost is the calculation tree parent concept, as prescribed by the FASB FAQ.