Governments should be as accountable to taxpayers, as corporations are to shareholders.

USAFacts.org is a nonprofit organization dedicated to helping citizens, the media, government and industry obtain deeper insights into the financial health of United States governments at all levels. XBRL US is a nonprofit standards organization that aims to make reported data from government and business, more consistent, timely, accurate, and machine-readable, so that information can be easily and inexpensively extracted and analyzed. Donnelley Financial Services (DFIN) is an XBRL US member that provides tools for corporations and governments to prepare their financial data in structured, standardized format.

Our organizations agree that access to information about the financial health of the U.S. public sector has significant implications for businesses, governments, and citizens, both inside and outside of U.S. borders. We also think that government financials are just as important as corporate financials.

Data from U.S. public companies has been produced in consistent, comparable, machine-readable format for over ten years. In 2008, the Securities and Exchange Commission (SEC) mandated the use of XBRL (eXtensible Business Reporting Language), the financial data standard, for all public companies. Income statement and balance sheet data from over 6,000 corporations is freely accessible on the SEC’s web site, posted within seconds of regulatory submission. Because this data conforms to the XBRL financial data standard, data consumers can easily automate the extraction of the reported facts, which makes data collection significantly less expensive.

But municipal reporting lags behind

Conversely, data on revenues, expenditures, and obligations of U.S. federal, state, and local governments is posted in “paper-based” (PDF) documents on various web sites, and is made available anywhere from six months to more than two years after fiscal year-end. This “document-centric” rather than “data-centric” approach, means that users of government data must download, scrape (or even manually rekey) information, and then vet it before any analysis can begin. The potential for error is high from data entry and the information is often inconsistent from one reporting entity to another.

Many researchers, instead, rely on state and local government finance data published by the U.S. Census Bureau or self-reported data posted on state portals. But this data is published more than two years after the relevant fiscal year end, and often diverges from the figures found on audited financial statements for any given entity.

On April 16, 2020, USAFacts published its fourth annual U.S. Government 10-K, representing data available for fiscal year 2017. The long gap between the effective date and reporting date is necessitated by reliance on the Census data set; gathering and scraping data from tens of thousands of state and local PDF-based financial statements would be a monumental task, and even then it would comprise a smaller data set than the Census offers.

The financial statements were prepared in Inline XBRL, a standard that renders the financials in both machine-readable and human-readable (HTML) format. USAFacts, worked closely with the XBRL team at DFIN, leveraged a demonstration taxonomy (digital collection of terms) that was created by the XBRL US Standard Government Reporting working group to represent the Comprehensive Annual Financial Report (CAFR) statement. The taxonomy was created to prove out the value of standardizing reporting by state and local governments and contains seven statements, two footnotes, and two schedules, as well as identifying information, from the Single Audit Report: 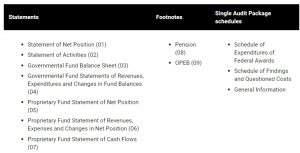 The availability of the USAFacts government financial statements in machine- and human-readable format, as shown below, vastly improves the usability of the statements. The taxonomy was developed as a starting point for state and national oversight bodies interested in adopting standards. 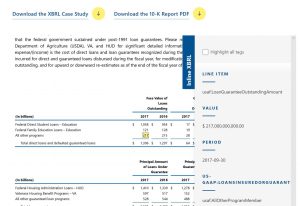 With Inline XBRL, the face of the financial statement, as well as the underlying metadata associated with each value (definition of terms, labels, units, scaling) are visible with a web browser, as shown on the figure above.

Standards have been widely used in the private sector for years. The Federal Deposit Insurance Corporation (FDIC) mandated the use of standards for banks in 2005. The SEC did the same for mutual funds, public companies and credit rating agencies in 2009 as noted earlier.

But within the last few years, there has been renewed interest in standards for government reporting by U.S. regulators, as a means to drive efficiency. The figure below shows recent activity from 2018 to date, illustrating the move towards greater use of standards at a federal, state, and local level. Individual regulatory agencies and legislators alike, recognize the benefits that standardization can bring. 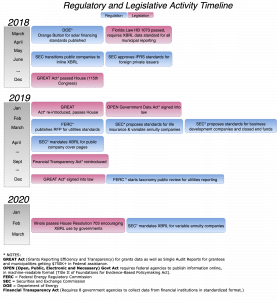 At a state and local level, Florida has taken the lead towards greater standardization. Florida’s HB 1073, which has already been signed into law, names the goal of this bill as “… a proper and legitimate state purpose is served when governmental financial statement data is transparent and readily accessible to members of the public. Therefore, the Legislature determines and declares that this act fulfills an important state interest.” The state of Illinois passed House Resolution 703 in February 2020, which encourages the use of the XBRL standard by local governments.

The benefits of standardizing CAFR financial data for Florida, and eventually Illinois, can, and should, be extended to all U.S. cities, states, and local governments.

Where to go from here

All government data – federal, state, and local – is critically important to U.S. citizens, investors, and policy makers at all levels of government. Standardizing that data – agreeing on a single set of terms and definitions, and rendering the data into machine-readable format, would make it significantly easier to extract, understand, and analyze.

USA Facts, XBRL US, and DFIN strongly urge municipalities to take advantage of the XBRL financial data standard, and technologies that can propel the country forward in the 21st century and beyond. American taxpayers and other parties, interested in supporting government and its initiatives, deserve greater transparency into government activities.

Learn more about the work of the XBRL US Standard Government Reporting working group and access the CAFR Taxonomy.

In the last few months