Reporting, collecting, and analyzing data about individual grants, and the grantees themselves, is time-consuming, labor-intensive, and costly. Grantees prepare multiple forms, and duplicate data reported. Federal awarding agencies and other users of grantee information manually extract data from inconsistently prepared PDF forms or text files. The GREAT (Grants Reporting Efficiency and Transparency) Act aims to improve efficiencies and lower the cost of grants reporting by leveraging data standards. Given the current COVID-related need for relief funds for state and local governments, and nonprofits, greater efficiency is now more critical than ever.

To test the impact of data standards, we conducted a pilot to render information reported about a single grant, plus financial statement data used to evaluate the fiscal health of the grantee, using the open, nonproprietary XBRL (eXtensible Business Reporting Language) standard. The pilot was designed to test whether grants data could be rendered unambiguously machine-readable, and if by doing so, reduce the burden on grantees and federal agencies. Below are key findings:

This case study examines the preparation of structured, machine-readable grants data for a single grant awarded to the College of DuPage (COD). The XBRL data standard was used to demonstrate how data standards can be used to support the requirements of the GREAT Act, and to enable automation to reduce costs, improve efficiencies, and enable better outcomes for grantees, federal agencies, and others using grantee data.

Every non-federal entity that spends $750,000 or more in federal grants funding is required to submit to the Federal Audit Clearinghouse (FAC), a Single Audit report, which is an organization-wide financial statement and federal award audit. Grantees must also submit a Form SF-SAC[1] to the FAC, which contains data extracted from the Single Audit report.

In December 2019, the GREAT Act was signed into law. This legislation requires federal government grantees to submit grants data using data standards that:

“…shall, to the extent practicable:

The College of DuPage (COD) is a public community college in Glen Ellyn, Illinois, serving nearly 21,000 students, and is one of the largest providers of undergraduate education in the State of Illinois, second only to University of Illinois at Urbana-Champaign.

For the year ending June 30, 2020, COD reported that they had been awarded over $51.64 million in federal grants, and therefore are subject to Single Audit requirements.

The pilot tracked a single grant that had been awarded to COD through the reporting in multiple documents that were submitted to the federal awarding agency and the FAC. This case study describes the current grants reporting process, followed by the approach taken for each step using data standards.

COD’s grants writer in the Grants Office prepares the initial request for grant funds which can vary in length depending on the complexity of the request. A budget is prepared by the Finance Office. These materials are submitted to the federal awarding agency. The grant used in the pilot was for the FY20 GenCyber Advanced Student Camp, a program designed by the National Security Agency, under the Department of Defense (awarding agency), to expand the number of students studying cybersecurity in the United States.

When COD was invited to apply for the grant, they prepared the SF-424, an online, “PDF-fillable” form provided by the Office of Management and Budget (OMB). Grants-related data reported on the SF-424 includes federal awarding agency, project narrative, contact information, timeframe, and award amount. Some federal agencies use this form, some do not, although the information required to be submitted is generally the same. The COD Grants Office is responsible for the submission, and collects budget and other financial related information from the COD Finance  office, as needed. In some cases, the awarding agency may request additional information such as resumes of those performing the work, or letters of support from other organizations.

As part of the pilot, the first step was to create a set of data standards to represent the various grants data needed to be reported including the OMB-developed Federal Integrated Business Framework (FIBF) data elements, with additional items created to represent the SF-SAC and financial statements that are included in the Single Audit report. The figure below shows the hierarchy of the data fields in the digital dictionary, called a taxonomy. A group like 901000 – Single Audit Schedule of Expenditures of Federal Awards and Major Programs, shown in the top left call-out box can be disaggregated to show the hierarchy of items that can be used to identify facts on a schedule, as seen in the top right call-out box. Similarly, the items needed to render the SF-424 report machine-readable are found in the group 908000 – Grants Management Application for Federal Assistance (SF24). 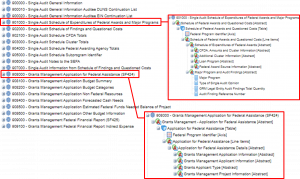 Items in the digital dictionary can be used to represent a value reported in the SF-424 or other grants document, or the Single Audit report (including the various schedules and financial statements). The taxonomy is created once, and can be updated whenever reporting needs change. The taxonomy is the “single data model” that can be developed and managed by a single federal agency (like OMB) but leveraged by every other awarding agency.

When a value is recorded in the SF-424 or other grants report, it can be associated with a taxonomy concept that has clear, consistent, labels, references, and properties, like Estimated Funding shown in the figure below. 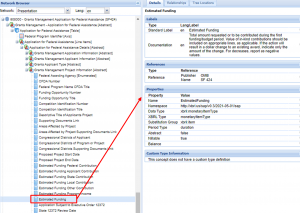 The second step in the pilot was to create an XBRL-formatted SF-424 to represent COD’s grant application. This could be prepared by any one of multiple commercial applications on the market. Given that federal agencies already have a “PDF fillable” form, the primary agency in charge of managing the grants database could revise the online form so that when data is input, a machine-readable SF-424 is generated automatically and submitted to the awarding agency.

The primary agency could also use the digital dictionary (taxonomy) to “auto-generate” an online, fillable SF-424 (or any other required grants report) so that whenever the grantee uses an application to generate an SF-424, the application references the taxonomy and tells the grantee what they need to report. This saves time and effort for the federal agency in charge of maintaining the single taxonomy. The agency can revise the taxonomy to add, change, or delete required items and the taxonomy “communicates” these reporting requirements directly to the applications used by grantees to prepare their documents. Revising the taxonomy does not require IT assistance; it can be managed by agency analysts which improves efficiencies.

A machine-readable SF-424 can be rendered as XML, JSON, CSV, or even human-readable HTML (called Inline XBRL). A partial view of the COD SF-424, which is both human-readable and machine-readable, is shown below. Click on the image title to go to the actual file. Inline XBRL is HTML with embedded XBRL. Each green-highlighted fact in the report contains an embedded XBRL “tag” that can be read and unambiguously understood by a computer. The black outlined pop-up box to the right is an online viewer that shows metadata about each tagged fact, like the value 36-2594972 which represents the Employer Identification Number (EIN) for the College of DuPage. We can see that by reading it, but now even a computer can understand and extract the value automatically. 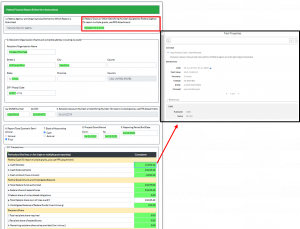 The Federal Financial Report (SF-425), is often used for periodic reporting to the federal awarding agency, depending on the grant. COD’s Finance Office submitted the SF-425 to the awarding agency for interim reporting on a quarterly basis. As with the SF-424, this was prepared using an online fillable PDF form which transmits it automatically to the recipient, or it can be downloaded and emailed. COD included the Federal Award Identifier, “H98230-19-1-0173” (shown in the top red callout box on the figure below) which was assigned by the awarding agency after submission of the SF-424. The SF-425 also includes data on cash expended, and unobligated amounts, as well as recipient share and income generated by the program, if any.

We rendered the SF-425 fully machine-readable by leveraging the digital dictionary (taxonomy) and converting the report to Inline XBRL. The image below shows part of the SF-425, with the properties of the value 15,602.22 appearing in the black outlined pop-up box. The properties explain that the fact represents cash receipts in US dollars for the period July 1, 2019 to June 30, 2020.

For the pilot, we re-formatted the SF-SAC, a subset of the financial statements, and schedules in machine-readable format so that data contained in any of these documents could be automatically consumed, and immediately used. To do this, we leveraged the same digital dictionary (taxonomy) referenced earlier, then used various commercial and open-source tools to XBRL-format the documents.

The images below are partial views of the Schedule of Expenditures of Federal Awards, SF-SAC, and financial statements. Every reported value highlighted in red on each report or statement is machine-readable and can be automatically extracted. The Schedule of Expenditures of Federal Awards contains the Federal Award Identifier, H98230-19-1-0173 which is the unique identifier representing the Advanced Student GenCyber Grant (2019-2020), which is also referenced on the SF-425, and if there was an associated audit finding, this identifier would also be found on the SF-SAC. 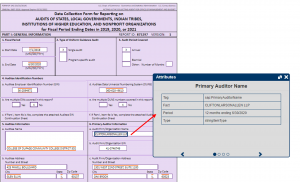 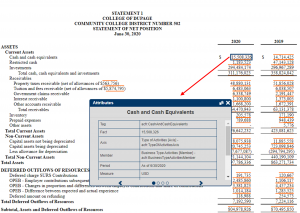 This case study, tracking a single grant through initial application to ongoing reporting, demonstrates how data standards can be used to monitor the performance of a single grant from start to finish, and can render all grants reporting data in unambiguous, machine-readable format. Benefits to stakeholders from data standards include: